About The John Blanke Project

The John Blanke Project is an art and archive project celebrating John Blanke, the Black trumpeter to the courts of Henry VII and Henry VIII, the first person of African descent in British history for whom we have both an image and a record. 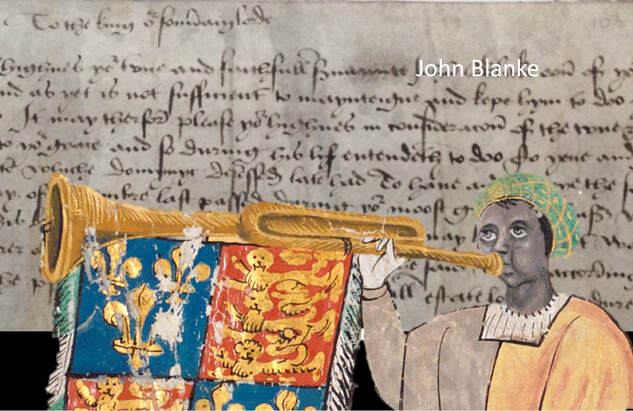 Image of John Blanke Detail from The Great Tournament Roll of Westminster from College of Arms
Record of John Blanke’s petition for a wage increase from Henry VIII in the National Archive
The Project, which began in 2016, has its genesis in art and British history reflected in its strap-line – Imagine the Black Tudor trumpeter. It encourages artists and historians to re-imagine John Blanke from his fleeting, ephemeral record and images in documents and texts from the period.

The history that inspired and informed the Project was a series of talks for Black British History Month 2013 entitled Image and Reality Black Africans in Renaissance England - IRBARE - a joint venture between Dr Miranda Kaufmann then a freelance historian and journalist now author of the acclaimed Black Tudors: An Untold Story and myself, then a so called autodidact, now art and cultural historian with an established practice thru Image of the Black in London Galleries. While the art that inspired the Project was Stephen B. Whatley acclaimed murals at Tower Bridge depicting the life and times of Henry VIII. Stephen included John Blanke in his version of the central jousting scene from Westminster Tournament Roll.

Miranda and I shared a common passion in the study of people of Black African descent in Britain during the 15th and 16th centuries.

Miranda as part of her PhD thesis had found over 350 persons of African descent in the period's written records – court and parish records, wills, court accounts, literature and the like. While I studied the Black presence in art of the period, two Black images dominated my studies, the Black Magus found hundreds in the  Adoration paintings and St Maurice the Black Roman centurion.

I presented many images of those two mythical characters - The Black Magus and St Maurice - both were a fabrication, a conflation of myth and Biblical study while Miranda’s work presented details of the actual lived lives of real Black Africans and their descendants  found in the written records of the day.

There was one person in which our individual interests - Image and Reality - met, that was John Blanke, the black trumpeter to the courts of Henry VII and Henry VIII. There are two  images of him in the 1511 Great Tournament Roll of Westminster in College of Arms collection and he is documented in court records held at the National Archives as receiving wages, famously petitioning for a wage increase  and gifts. The  first historian to make the link between the John Blanke in the Art from the Great Tournament Roll of Westminster and the John Blanke  recorded in the Archives at the College of Arms and National Archive was Dr Sydney Anglo.

Today John Blanke’s image is acknowledged in Stephen B. Whatley’s much admired series of murals celebrating the life and times of Henry VIII at Tower Bridge. Stephen depicts John Blanke in his stylised version of the central jousting scene from the Roll. Through the success of Miranda’s Black Tudors he and other Black Tudors have become an accepted part of Black British History, seen on the cover of and articles in history books and magazines as well as becoming a recommended part of secondary school history curricula and characters in period drama pieces. 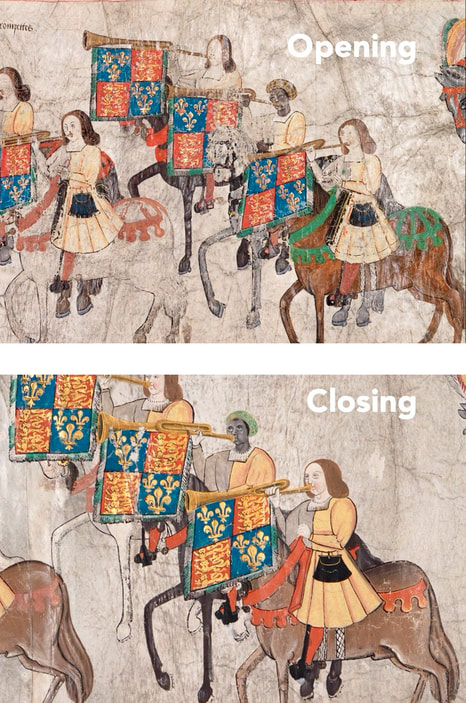 So, if John Blanke’s image is not true to life, being only a caricature then just as artists and patrons were free to create their own ideas of The Black Magus and St Maurice so artists should be free to portray John Blanke as they might imagine him from his role and his record,  while historians were  invited to comment on John Blanke's presence and significance.

The very first artist I commissioned was Stephen, for which he generously produced an A4 drawing of John Blanke for the same fee as an A5 one. It was his work that inspired me to commission other artists to do A4 drawings of how they imagined John Blanke.  I wanted to keep their drawings black and white as I had in mind an Exhibition where all the work might be displayed alongside the Roll, creating a brilliant aesthetic contrast with the black and white of the artists’ images and wonderful colour found in the Roll with its much use of gold leaf, rich reds, deep blues and greens, and radiant yellows, as the Roll has been kept in storage, seen rarely in the past 500 years. 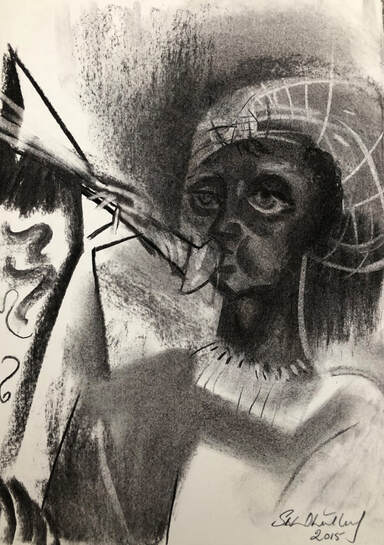 Stephen B. Whatley, Tribute to John Blanke, (2015), Charcoal on paper, A4
My idea is that none of the artists’ works save for Stephen’s was to be exhibited on line, rather each artist was invited to make a statement about their work beginning with I imagined John Blanke as…

Historians were invited to write 300 words or so on the Project’s strapline Imagine the Black Tudor trumpeter. Their imagination took many forms from his ephemeral presence in the record for example Professor Hakim Adi saw him as an agent of change, and the Black History Man Robin Walker considered  John Blanke as a Black man with a trumpet: changing perceptions, the curator Dr Jan Marsh saw his depiction as an invaluable Tudor portrait, while Professor Olivette Otele considered  him as an Afro- European

From its art and history foundations the Project has since taken on increasingly, a cultural significance as too many cannot imagine a Black Tudor presence believing it to be ‘inaccurate or inauthentic’ refusing to believe his story as ‘we all know there’s an agenda behind this bullshit’  . The Project challenges such failures of the imagination thru its historians and artists telling a real and unmistakably inclusive Tudor history showing how history, art and the imagination can work together making connections between Black British history, then and now.

The Project continues to develop with the recent discovery by Sean Cunningham,  Head of Medieval Records at The National Archives of a 1488 John  Blank (sic) footman to Henry VII  in the Tudor court records,  having us rethink and ask who is John Blanke as we imagine the Black Tudor trumpeter - that is The John Blanke Project.